5 Tips for Reacting to Large Roadkill on the Highway 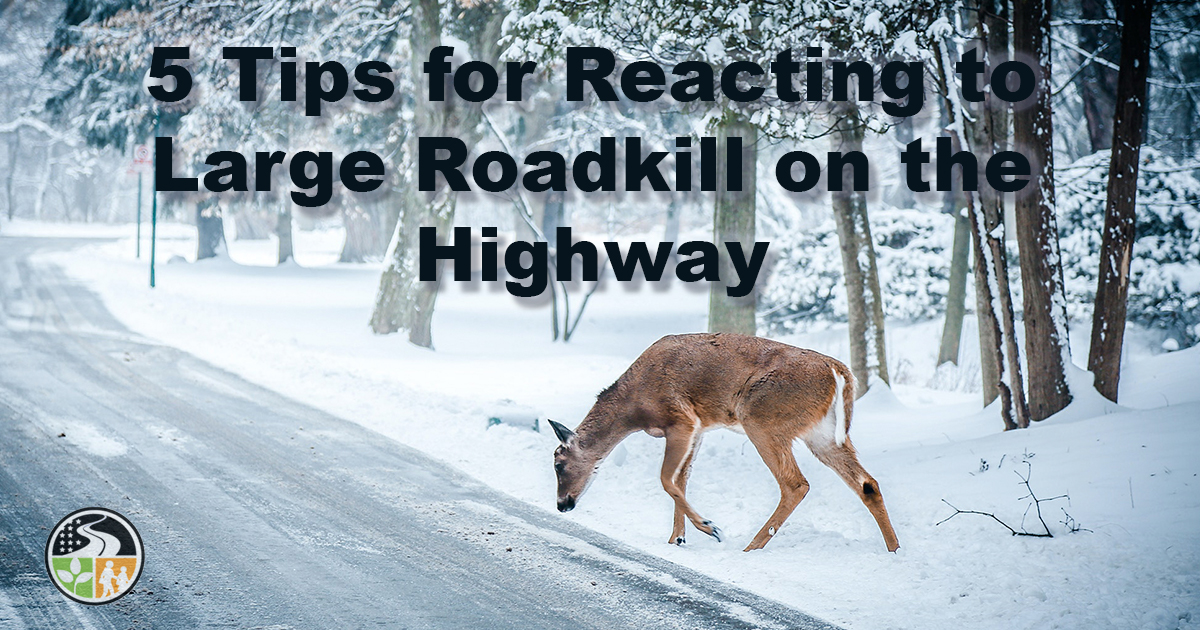 Why did the chicken cross the road?

Sadly, sometimes it is not a matter of why an animal attempted a dangerous crossing, but rather what to do when you discover a dead animal on the roadway—especially a large animal. We‘ve attempted to gather up a few observations and tips that you may find helpful. These generally assume that you are a passerby and have not actually been in a collision with the animal.

Note: The term “roadkill” is not particularly sensitive, but it does accurately capture the idea. Many animals are killed by vehicles when they venture out of the woods and onto the roads. One website softly refers to them as “tired animals.” However, since this is not a well-known term and could easily be a reference to pandas and sloths, we will stick with roadkill.

Let’s use deer as an example. On a recent road trip from Delaware to Oregon, one carload of slightly bored travelers kept a running tally of factors they noticed from state to state. They included the number of deer carcasses seen on or near the interstate highways. (The route zig-zagged a bit and obviously many states were missed due to route choices.) How many disintegrating deer were there?

This was not a highly scientific study, but it is still telling. The western states were surprisingly deer-free, at least on the highways. Several states tickled the edge of double-digits. Interestingly, the runaway leader in this sad category was Kentucky, with a stunning 38 deer carcasses. And that was only traveling through a small portion of the state!

Fortunately, in this little exercise in counting, most of the deer had already been cleared from the roadway, either by passersby, government workers or just by the force of impact. But this only emphasized the question—what is a driver supposed to do when they see large roadkill that is still on the roadway? A large animal corpse in a lane of traffic could easily cause damage to vehicles or even a collision as drivers swerve to avoid the roadkill.

It all depends on the situation. There is no set process or hotline for animal carcasses on the roadway. The various states have their own numbers and departments responsible for cleaning up the roads. However, the following five tips may help.

1. Where are you? Identify the location, perhaps using your cell phone to “drop a pin” or by noting a nearby mile marker. If there is sufficient room on the shoulder you may wish to pull over and stop to make a phone call. However, many rural highways do not have enough space to safely make a roadside stop. It may be best to proceed to a safe area—such as the next gas station before reporting the situation. Or you could ask a passenger to place the call.

2. Should you try to move the corpse? (This sounds like a scene from a scary movie, right?) Opinions differ on this point. Weigh the risks carefully before attempting to move a large (and possibly diseased) animal carcass yourself. It’s a messy task. Do you have gloves? Are you strong enough to drag the animal out of the way? Is it blocking traffic? Most importantly, are you putting yourself at even greater risk than the danger posed by the animal lying on the roadway?

3. Who should you call? While your first impulse may be to call 911, this number is for urgent emergencies. It is usually better to use some other established number(s) for reporting roadkill. Do you know the number(s) for your state? You can usually find it with an online search. For example, Tennessee has four numbers to report roadkill in different parts of the state. California directs drivers to their non-emergency number for the California Highway Patrol. Many other states have similar non-emergency hotlines.

4. Do you need to wait until someone arrives to move the roadkill? If you were not involved in the collision, there is probably no reason to stick around. This is not CSI. The authorities are not going to take a witness statement or try to track down the driver. So, in most cases, it is sufficient to report the situation and then continue with your trip.

5. Is the venison going to waste? Many states (but not all) have systems in place that allow “harvesting” meat from wildlife-vehicle collisions. This might include deer, elk or wild boar. For example, a motorist that hits a deer in Oregon can salvage the animal meat, but must then apply for a permit within 24 hours of the collision. The head and antlers must be turned in to the Oregon Department of Fish and Wildlife. In most cases, you can salvage the pavement bounty even if you were not in the vehicle that struck the animal. Keep in mind though, that this option gets icky quickly if much time passes after the collision. Check for the applicable laws in your state. (Given the above tally, this certainly adds a new twist to the term “Kentucky fried.”)